We’ve been having an ant problem in our truck for the past six months and we are on our second set of ant traps. The ant traps worked for about 3 months or so but there must have been a cluster of pupae tucked safely away while their elderly counterparts suffered in dying agony. Hmmm….somewhere in the engine or in the hollow parts of the glove box.

As I pulled into a parking space at the downtown KTA, Mehana was asking me about how the new ant traps were working. I said , “oh good—they’re dying and I also found a queen ant stuck in the rug of the interior.”
Malino (bright-eyed with a front teeth less smile): “Mommy! Did the queen have a little tiny crown like this on her head?” (She put her little thumb and pointer finger together as if she were crowning what she imagined as a little queen ant.)

I thought of the queen ant helplessly trying to free herself from the rough gray carpet of the truck’s interior. The little black one millimeter insect who was the largest among the army that marched out of the glove box in search for crumbs from our ‘on the go’ breakfast mornings and quick snacks in between transporting children to practices and exhausting grocery shopping trips. Her wings were useless and in disarray as she succumbed to the poison by consumption or by plague from the so-called brave ants who carried the poison.
I felt no remorse as I let her writhe in pain and suffering. It felt victorious to finally be rid of the pretty pest. I thought, “How dare these ants invade my joyful and happy place.” ….but then…didn’t I invite them in by carelessly devouring our breakfasts and snacks with no intention of taking care of the remnants promptly? Maybe. Is this my punishment for not diligently cleaning after myself? Maybe.
You see, when you decide to not clean up after yourself, you have a chance of inviting a series of unwanted events. For example, we all know what happens when food trash is left out in an uncovered bin for too long or if you leave clean clothes in a humongous pile for weeks….yup…it gets musty and dusty and smelly so then you’re doing double work as you put it in the washer and dryer or clothesline one more time!

In the midst of my busy weekdays, game filled Saturdays, and hurricane mornings, when I don’t take those 20 seconds to sweep off crumbs and pick up the trash in the truck, I am most likely to invite unwanted company. Gaaah! Thank God it’s not roaches! But still, now I have to kill a whole colony of ants because of my own laziness. Ants work tirelessly to carry food to their homes-I mean CARRY food twice as big as them, moving diligently in organized paths. Why can’t I pick up some flimsy granola bar wrappers and put it in the trash! Thank you ants for pointing out my laziness. Sorry queen ant for inviting you into our space and then feeding poisonous ant bait to you and the rest of your crawly multitude. I know I can do better. 🙂

Proverbs 6:6 Go to the ant, you sluggard; consider its ways and be wise!

If you happen to have a chocolate bar in the house, slice it up and add to your recipe. You can put a towel under your board to keep it from slipping while you chop-chop-chop!
Apr. 2, 2013

To Boston with Love
Love and Light and Healing to All

Do you know that nothing you do in this life will ever matter, unless it is about loving God and loving the people He has made?-Crazy Love by Francis Chan

My heart and prayers go out to the people of Boston in this time of tragedy…we must heal in love and togetherness rather than anger and blame in order to move forward through any tragedy in this world and in our lives.
“The LORD bless you & keep you; the LORD make His face shine on you & be gracious to you; the LORD turn His face toward you & give you PEACE.”-Numbers 6:24-26

love to all!
Myra

This Is Where the Healing Begins
Just days after…
“Boston’s Trinity Church service held at the Temple Israel Synagogue:

“So where is God when the terrorists do their work? God is there, holding us and sustaining us. God is in the pain the victims are suffering, and the healing that will go on. God is with us as we try still to build a just world, a world where there will not be terrorists doing their terrible damage.”-Reverend Samuel T. Lloyd III”
Hawaii Tribune Herald/Associated Press by Allen G.Breed and Steve Peoples
Apr. 25, 2013

This years Merrie Monarch parade was a long and hot one. We sat to the right of the Chock building on Keawe street. The sky was overcast toward the mountain and a pretty sky blue toward the ocean. The twins especially enjoyed the parade participants who gave out candies. Since we were quite a distance away from the starting point, their were some gaps in between group participants. I was very thankful that Hulali and Malino were patient through it all and the heat sometimes got to them but luckily we were prepared with our big umbrella and cool clothes!
April 6, 2013

While I was sitting under my umbrella hiding from the blazing sun at the parade, Mehana finished a 3000m race in 1st place at Konawaena School. Then she caught a ride back home with a friend to prepare for that evening’s Junior Prom. Although she is actually a sophomore, she had the privilege in accompanying her friend who is a junior. She made it home at about 3PM while I was out picking up the maile lei for her friend. The plan was to meet up with a bunch of friends and their moms at Imiloa to take pictures. So she had less than an hour and a half to get cleaned up, do her hair and apply make-up and get her dress on. Despite the fact that we didn’t have any hot rollers or hairspray or blush we quickly problem solved and got her dolled up in a matter of ‘less than an hour and a half’!
April 6, 2013

In as little time as an hour and a half or less, you can be prom ready by following these simple steps in creating curly prom hair.

1) Wash and dry hair completely with a blow dryer
2) Divide the hair into sections.
3) Twist sections into knobs or tight spirals. Fasten with rubber band.
4) Leave on until makeup is done and dress is on.
5) Before leaving the house, unfasten knobs and spirals, finger comb, pin as desired and spray with maximum hold hairspray
Apr. 13, 2013

I didn’t have time to go out and by a new blush pot so I took some lipstick, dotted it over Mehana’s cheeks that were already covered with foundation and blended away from the apples and over and around the entire cheekbone. Then I dusted a very little amount of highlighter right on the apples. This technique not only brought out her cheeks but also served as a substitute to contour powder which I have never tried yet. In the picture, you can clearly see where you would be able to apply the contour powder but why bother when the structure of her face is already clearly defined…thanks to those blessed high cheek bones.
Apr. 13, 2013

It was delicious as always. I’ve never had a bad meal at Cafe Pesto. What even made the event more special was meeting new people who were taken captive by the slow food movement. I met a couple from North Carolina and I reconnected with our friend Claire Bobo from Island Thyme Gourmet. I also had the privilege to spend time with a couple of my fellow soccer moms and friends: Lorene and Amy. Our sons play soccer together and it was great to catch up on how we were all doing and it was a totally different scene from our usual setting at the soccer fields. Furthermore, the occasion was very relaxed and joyful! 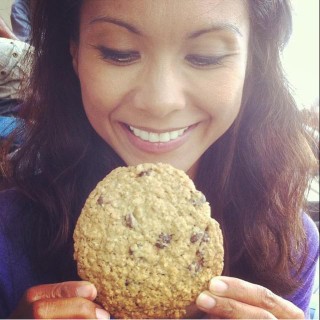 I am a mom aiming to preserve the many special moments in my life that I have been blessed with. I want to be able to capture the beauty that surrounds us daily in our busy, schedule-filled lives and tell a story through journal writing and photos. This will be a lasting legacy for my family to fall back on to enjoy and read. I hope that what I share here will bring joy and healing and inspiration to all. And that everyone may take the time to see the wonderful works that God has made in each and every person and in every good thing that we encounter day by day. Follow along and enjoy the journey!